skip to main | skip to sidebar

What's worth leaving a comfy sofa in a warm apartment with a flickering TV showing the good guys with an early two-run lead in game 1 of the World Series (see below) on a chilly night to go deep into Brooklyn for? This guy. 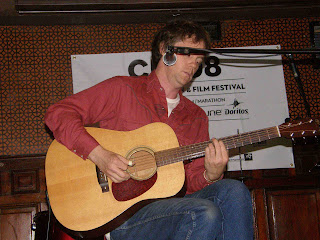 Like most great artists, Brokaw's skill lies in communicating bracingly real emotions, even when (sometimes especially if) going without his fine/sand vocals. And what he's transmitting is quintessentially American: Unfurling Canaris's most astonishing piece, the 12-minute-plus "Drink the Poetry of (the) Celtic Disciple," Brokaw, strumming and picking, broke into fleet chords that conjured thoughts of a new lover reaching for your hand and pulling you gleefully into a sublime pastoral, racing through field and wood, pausing, opening into clearings, running not for your life but just for life, all of it existing more in some collective memory than in our actual lives (mine, at least). My scholarship on Charles Ives is a bit thin so I'm speaking out of turn, but—that. The composer's same power to make you dream of American space, real and mythic and blurred together.

By the way, the aforementioned "Drink the Poetry…"? It's a cover—of a French black-metal band from the ’90s called Vlad Tepes, who were (duh) part of a collective known as the Black Legions. So in addition to all the above, it appears that advanced alchemy is also in Brokaw's quiver.
Posted by Mike Wolf at 2:34 PM

Mike Wolf
NYC
"In breath there are no edges"